I’ve had the privilege lately to meet quite a few horses and their humans due to trailer loading problems. I am becoming quite aware just how much of a problem this is for a lot of people. Who wants to have a horse and a trailer and not be able to take them out anywhere? It does not have to be this way and it certainly doesn’t have to be the norm!

We all need to understand that it’s a purely instinctive reaction on the part of your horse to resist going into a trailer. Horses have spent millions of years avoiding enclosed spaces. They’re prey animals, and every self-respecting prey animal on the planet knows that he must never be cornered, let alone on all six sides: top, bottom, left, right, front and back. No wonder horse trailering is such a big problem!

“It’s Not About the Trailer”

It might seem unusual to you but believe it or not a horse trailering problem isn’t about the trailer. It’s usually about your relationship with your horse. It’s about inspiring confidence in the horse and getting him to trust you and your leadership. The more you push and force, the less the horse will trust you and the less he will want to follow your lead.

Your success with being able to load your horse into a trailer starts a long way away from the trailer. You need to know how to get your horse to trust you, to respect your leadership and to understand what it is you want from him. The trailer loading is somewhat incidental, although it is an important goal.

In my experience there are two types of horses when it comes to trailer loading:

The more you can help your horse learn to respect and trust you, the less he will say ‘no’ to trailer loading and anything else you ask him to do. Create a contrast for your horse between comfort and discomfort. All a horse is ever looking for is relief, this relief is learned by release of pressure and when we quit doing what we’re doing.

We all know that you can force a horse into a trailer and shut the door quickly, but there’s a better way to help your horse, using an approach that is far less frustrating and dangerous for both the horse and human.

Play some games with him at the trailer, e.g don’t walk him to the trailer and expect him to load right away. Simply getting him to be confident about going between you and the trailer can be a big step forward for a lot of horses. Create a contrast where you get the horse to move his feet away from the trailer and then send him towards the trailer to rest and relax. He’ll start to view the trailer as a place of safety, peace and refuge instead of the place where pushing and shoving and confinement happen. It becomes associated with comfort rather than discomfort and he’ll become much more relaxed around it and able to do what you ask.

How I got to where I am today!

Fear and Self Doubt 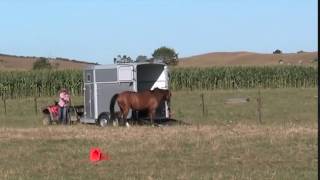 We all start at the beginning